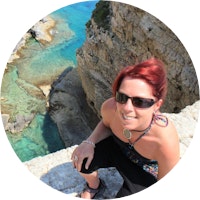 Gallop Around the Globe

Hi I’m Kiara! My love of travel and adventure started from a very young age. I remember being about 9 years old, when we still lived down in Cambridge, and we had this huge conifer tree at the bottom of the garden. Through the power of my imagination, I was transported to an alternative world if I ran around the tree nine times in one direction (I had to run around it nine times in the other direction to return). This kept me entertained in our garden on my own for hours. I used to imagine the people and creatures I met, the tasks I had to undertake, and the realms I explored.

I also read a lot of Enid Blyton and loved programmes like Dungeons and Dragons, The Mysterious Cities of Gold, Dogtanian, and the Chronicles of Narnia.

Adventure was in my blood.

At the same sort of stage in my life I recall family outings and holidays. Unbeknownst to my parents (who were probably too busy keeping an eye on my younger brother, or map reading or looking at the scenery), I would regularly wander off on my own. This wasn’t a kind of rebellion, it wasn’t necessarily because I’d fallen out with my parents or had a tantrum about something I was forbidden to do. It was largely due to the fact that I knew there was more to the world that the confines of the environment in which I was allowed to roam. And I wanted to explore it.

Unfortunately, because I was so young, this adventure I foresaw myself undertaking, always came to a frightening end at the point that I realised I was actually lost and had no idea where my parents were!

The passion for writing came later on, in secondary school, when I was lucky enough to have the most amazing English teacher who nurtured and encouraged what she believed to be a real talent of mine. At the time, as a child with little self confidence, it was lovely to get the praise, and it was wonderful that someone actually thought I was good at something I really enjoyed. But that’s as far as it went. Realistically I never believed I could make a career out of writing, so I finished my English Literature degree at university and got a reasonably well-paid job in retail telecommunications.

My love of travel still continued to grow, as did my passion for photography (learned I think from my dad and my uncle, who both had SLR cameras and were keen amateur photographers), and I made sure that I fully utilised my annual leave allocation to fulfil those passions. I travelled as much as I could.

It wasn’t until I was made redundant back in 2005, that I was able to fulfil a lifelong ambition – to travel solo, independently, and long-term. Ok, so maybe 6 months isn’t that long-term in the grand scheme of things, but for someone who’d never really done much by herself – let alone travel – this was a huge achievement. I chose to travel around South East Asia (as I’d been to Thailand back in 2002 and loved it), and this was when I began to keep a travel blog.

You can view the tales from my trip here

Travelling alone allows you a lot of time to think, to ponder, to reflect, to consider, to assess, and to write about your experiences. I wrote posts every two or three days, because when you travel so much seems to happen so quickly, and writing about it all kept it alive for me, kept the memories lodged in my head. Back then social media wasn’t what it is now (I didn’t even have a Facebook account, and am not even sure Facebook existed??), so I wrote simply to keep friends and family up-to-date with my latest adventures. Now I’d like to be able to explore the realms of travel blogging a little further.

I’ve skydived in New Zealand, bathed elephants in Thailand, paddled a little wooden dugout down the Nam Ou river in Laos, trekked the beautiful rice terraces of Sapa in Vietnam, walked the Great Wall of China, ridden a camel through the Sahara – in the rain, taken a hot air balloon flight over the surreal volcanic landscape of Cappadocia, Turkey, cycled the Adriatic coast from Venice to Porec (Croatia), experienced the crazy, colourful streets of Delhi, island-hopped in Japan, walked every inch of the pretty little Greek island of Paxos…and those are just the highlights! Whenever I have the money and time to do so, I’m continually adding to those experiences….I got bitten by the travel bug a long time ago!

I’ve had my fair share of mishaps along the way…including an awkward situation with a very ‘aroused’ monk in Laos, a drive-by thief on a motorbike in Cambodia, and a wild monkey attack in Thailand, but they’re all part of the rich tapestry that we call travel. What doesn’t kill us makes us stronger, so they say! and I have no intention of giving that up anytime soon.

To conclude, here’s a few random facts about me and my travels…

My first trip abroad was to Denmark when I was 11 years old. I took and passed my Legoland driving test, even though I didn’t manage to figure out that in order for the brakes to work, you had to take your foot off the accelerator pedal. I like lego now more than I like driving!
I cycled the entire stretch of the Adriatic coast from Venice to Porec (northern Croatia) in 8 days even though I’d not done any training, and the only bicycle I’ve ever owned in my adult life is an old BMX which I bought second-hand for about £40!