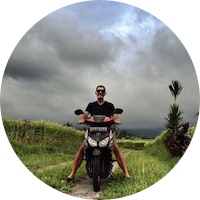 In 2011 Jonathan Look decided to take early retirement and pursue a life of adventure instead of comfort and possessions.
His philosophy; why sip life from a straw when you can drink it from a fire hose?
He embraces the philosophy that says a person is the sum of their experiences and rejects the fraud of modern consumerism that makes people into slaves of their consumption. He doesn't intend to be a modern day ascetic, just more mindful of his place in the world and to make decisions according to his new standard.