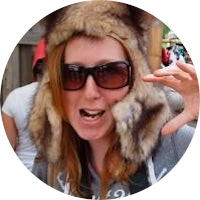 Candice Does the World

Well, hello there. How are you? I see you’re confused. You’ve wandered over into my corner of the Internet by following a path of righteousness, and now you’re standing here scratching your head in wonderment. Good call, my friend. Pull up a chair. Rest your weary soul.

My name is Candice Walsh.

I’m a 20-something female based in Eastern Canada, in St. John’s, Newfoundland.

Back in the day when my job title wasn’t associated with a porno featuring a woman named Debbie doing lewd acts to a Dallas football team, I had a professional life. I was a technical writer for an international deep sea technology company for two years. I wrote compelling literature about sonar equipment, and I documented user manuals.
Then I was laid off and my life was sent into an out-of-control spiral which found me tramping around all of Canada, some of South America, and even a fraction of Europe. “What in the world is that crazy, sexy ginger doing?” People marvelled. “Will she ever settle down and get a REAL job? She must be a lesbian.”

In 2013 I jaunted over to Ireland to research my family ancestry, and discovered I’m Canadian. Then I spent some time in Jamaica for a friend’s wedding, and then I found myself in western Canada being seduced by cowboys at the Calgary Stampede. Later in the year I took trips to Kissimmee, Florida, as well as Iceland and Jordan. 2014 shall include the likes of South Africa, Germany, Greece, and Croatia. Does it ever get tiring? Of course. Will I ever stop? Of course. Well maybe. Who knows.

In other words, life got damn good.

Nowadays I’m fully self-employed and “location independent,” whatever that means. Technically, “not having a home” is impossible for Newfoundlanders. We’re bred that way. I’m an editor at Matador Network, the world’s largest independent online travel magazine. I’m also the Lead Writing Faculty at MatadorU. I award students with hugs and free candy and bum slaps.
I’m a freelance travel writer, copy writer, and creative writer.

I like diet Pepsi, but not when there’s rum in it. I enjoy nachos, boys that smell nice, and good brewpubs. I love people. I am passionate about women’s rights. I refuse to give up real books in favour of e-books, and I don’t care how silly that is. This blog is reflective and narrative. My life is a tangled mess of unfortunate coincidences, bizarre experiences, and shady characters. You will find no grandiose exclamations of life lessons here, nor any “Top 5 beaches to get in touch with your inner yogi” shit.