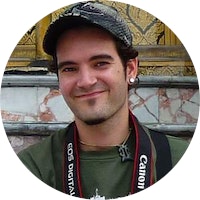 Alberto is a Spanish computer engineer with a master’s degree in Digital Media and a passion for travel photography. After spending a few years working as a software developer, Alberto decided that he needed a change; a role that would allow him to explore his creativity and lead a life on the road. WildJunket Magazine is the first of many projects that pushed him to leave his day job and join Nellie in her nomadic lifestyle.
Having been WildJunket‘s official photographer and web designer from the start, Alberto is no stranger to travel writing and social media. His photos have been published in numerous magazines alongside Nellie’s articles, including Wend, Food&Travel, Today Mediacorp and International Business Times. Alberto is also WildJunket Magazine‘s creative director.

Interesting Facts about him:
He’s a technology geek and loves his gadgets more than anything.
His favourite places in the world are Australia and Japan.
He constantly dreams of living on the beach and surfing everyday.
He dislikes spicy food but adores barbecued ribs and makes a mean tortilla de patatas.